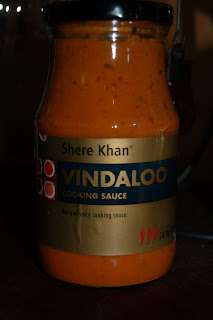 The other day I was puttering around the kitchen, trying to figure out what to cook for dinner.  I dug through my pantry and fridge and found a bottle of simmer sauce I picked up from Cost Plus World Market during one of my visits there.  It was a Vindaloo sauce, very low in calories, and I thought I'd whip up a tasty, quick dinner. 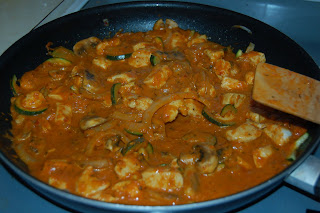 I swirled a tiny bit of oil in my skillet and added some cubed up pieces of chicken breast.  I let that cook then added onions, zucchini, and mushrooms.  Once everything was cooked nicely I poured in the Vindaloo sauce.  It was beautiful!  It smelled amazing and looked good.  I let the sauce, chicken and veggies cook together so the sauce thickened up a tad.  I couldn't wait to eat! 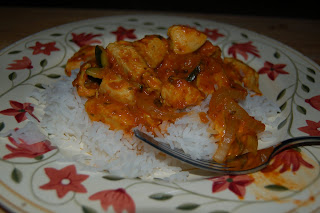 I put a bed of rice in the center of my plate, topped it with the Chicken and Veggie Vindaloo and sat down to eat.  I took one bite and WOW!  I thought my head was going to explode.  It was insanely hot!

What I failed to notice on the bottle of Vindaloo sauce were those three evil little peppers.  Now, I can handle some spice, but this?  It was way too much!  I sucked down a forkful of rice and tried a few more bites of my meal.  Big mistake!  My mouth was on fire and the heat seemed to intensify as I sat there and tried to eat.  Out of desperation, I gulped down a glass of milk to cool things off.

My poor husband can't tolerate spicy foods well (he's a big baby), so I put the remaining rice and Chicken and Veggie Vindaloo in a tupperware container and gave it to the only person I know who would eat it: My sister.  Turns out that was a good move--she loved it and thought it was spicy but not too hot to eat.  Apparently she inherited some sort of asbestos tastebuds or something.

Overall: this Vindaloo sauce was a huge disappointment.  I wish it had been a few degrees cooler because it looked, smelled and tasted so good.  Maybe I could have stirred in some yogurt to cool it off...who knows.  Oh well...you can't win them all!